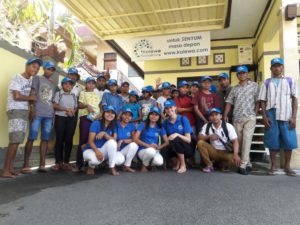 It all started in 2015 with Ingky, a boy from Kupang that had been seriously mutilated by burns. At Kolewa, we had never experienced something like this before, and we called this teenager the ‘living dead boy’. It was truly shocking. For Syta Plantinga, it was clear that she was going to help this boy: she only had to think about a way how. By using and showing photographs and film material of Ingky, Syta discussed her plans with Nestor John Fawcett from Australia, who was also a field partner for people with eye problems on Bali. Deeply moved, John promised his cooperation and so the story starts. John made it possible to arrange a doctor and a hospital in Perth. Syta arranged all paperwork for Inkgy and his accompanying family, made sure Ingky and his family could stay at another family in Australia and also raised funds for travel costs and accommodation costs among other things.

The following year, Heldi also travelled to Perth. Her life had collapsed 12 years ago, when she got severe burns due to a fire in her bedroom. The burns that Heldi got during this day were even more intense than the ones of Ingky. Again, it was a well-organised combination between the Kolewa Foundation and the John Fawcett Foundation during the treatment of Heldi.

In 2017 it became more and more known that Kolewa Foundation offered help to children and young adults with severe burns. In no-time, there was a waiting-list with more than 20 people that wanted to be helped. It was impossible to make sure that they all could travel to Perth, and it was also impossible to accommodate them all in our shelter. Yet again, Syta and John stood up.

Together with Dr Tim Cooper (Australia) and Dr David Duncan Smith (New-Zealand), an agreement was made that it would be possible to do surgery on Bali under the watchful eye of Dr Anom and his team: a three day long plastic surgery marathon. The patients were carefully selected on the basis of well-prepared documentation of Kolewa. At first, the plan was to arrange the first surgery in October 2017. Unfortunately, this turned out to be financially unfeasible and there was postponement for an indefinite period of time.

And then the inevitable occured: John Fawcett died. For a moment, the world stood still and so did the burns-project of the Kolewa foundation. At the Balinese cremation of John, Syta had the possibility to talk to Dr Tim Cooper. Together they decided that such a beautiful initiative should not bleed to death. A new date was chosen: it became May 2018.

The Kolewa team, in advance, made an enormous effort to have all 12 selected patients travel to Bali. A lot of paperwork, permission from the families, choosing a companion: it all took a lot of time, energy, patience and money. But it all worked out! On the 11th of May, all patients were seen by the surgeons for the first time and not that much later, all patients were laying one by one on the operating table. Serious and less serious cases, but for all this day was a life-changing intervention.

Without the financial support of the Childright Fund Netherlands, HSS Asia Travel, Volkopi Indonesia and the donations of a number of private individuals, we could never have realized our project. We are forever grateful. After being in the hospital for a few days, all of the patients have now returned to the Kolewa shelter home: Rumah Bicara. The recovery, the wound care and checks have been and will be an intense period for some of the patients. There is a lot of laughter and a lot of crying, but together we will all be alright.  The trainees from the Netherlands also contribute with this process. 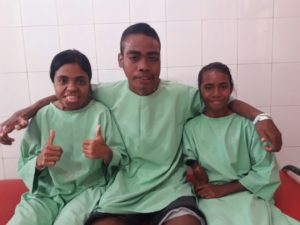 Ingky has had his third operation, Heldi her second one and Melkianus his first one. They have a lot of support for each other and have all become friends for life.

For Syta Plantinga, the realisation of the project was a wish being fulfilled and she hopes that in 2019, a similar marathon will be possible. She has also already presented her next wish to the outside world: cataract operations on the island of Rote. Cataract is a huge problem for the local population over there. Traveling with a medical team and operating for a week will give so many people the opportunity to get sight again … light in the darkness, a great project to test feasibility in the coming year.

Kolewa Foundation engages in a number of projects in Bali, Rote, Sumba and Flores in Indonesia. Our goal is to work towards a better future for families with a child with disabilities. Medical care, housing, education and rehabilitation do have our special attention. During our fieldwork we build bridges where possible between patients and local Indonesian organizations and institutions which may provide in making diagnoses, treatment or therapy. Kolewa Foundation facilitates, organizes and keeps abreast of the progress.

Bankaccount in The Netherlands

Stay up to date